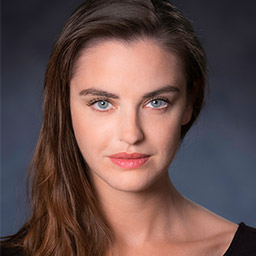 Prior to being accepted into NIDA’s prestigious Acting degree, Megan had a successful international modelling career. This saw Megan doing extensive travel, shooting campaigns for both fashion and TVC’s. Due to high demand Megan then based herself in Paris for four years, predominantly working for internationally recognised companies such as L’Oreal, Dior and Shiseido. She was also featured in such magazines as L’Officiel, Vanity Fair and Marie Claire.

As well as an immense passion for film, Megan has discovered a love and devotion to movement, Physical Theatre, aerial performance and choreography. In her first year she was a featured aerial performer in an exposed puppetry performance, a triple j film clip directed by Priscilla Jackman, and a featured performer in the 2014 NIDA Gala. Second year at NIDA was an opportunity for Megan to exercise her choreographic skills and development of physical expression through performance piece Embody and the Physical Theatre studio major. This year she was movement and choreographic assistant on her June production The Olympians.

In 2017, Megan will be appearing in two episodes of Cleverman season 2 as reporter Taylor Diaz.

Megan is dedicated to applying her training and experience to the creation of heightened physical and visual forms of performance for both the stage and screen.