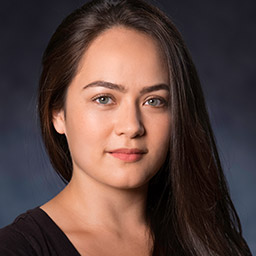 Laura grew up in Perth with a passion for performing. She was involved in numerous plays and musicals from a young age, with highlights including playing Anna in The Warrior and the Princess (Spare Parts Puppet Theatre), originating the roll of Nell in With Friends Like These, written and directed by the late Edgar Metcalfe OAM, and Sally in Bully Busters (Class Act Theatre), a production which toured schools.

Laura commenced studies at the University of Western Australia, but continued them at the Western Australian Academy of Performing Arts (WAAPA), where she completed a Bachelor of Music majoring in Classical Voice in 2012. At WAAPA, she had the opportunity to perform in the operas Die Fledermaus and The Rake’s Progress, and was nominated for the Julie Michael Award for Musical Cabaret.

After graduating, she spent time abroad teaching at Frenchwoods Festival of the Performing Arts in New York, where she realised that as much as she loved singing, acting was her passion. She applied to NIDA, was accepted, and moved to Sydney shortly after.