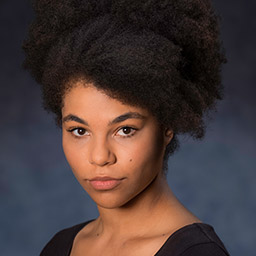 Ebony was born and bred in Sydney to Tanzanian and Australian/Latvian parents. Never giving up a chance to jump on stage, she's been hooked on performing her whole life with the dream of one day studying at NIDA. By high school she focused on her passion for drama, performing as Dolly in Cloudstreet and Agnes in A Dream Play.

Hoping to further develop her skills she also pursued work with ATYP on the Voices Project film To Be and the development of The Tender Age with Version 2.0.  In 2013, by the time she finished her HSC, she'd received First in Drama and her school award for exceptional performance and outstanding commitment and dedication to drama.

Ebony auditioned to NIDA when she was 17 and was accepted straight from high school to the Acting course.