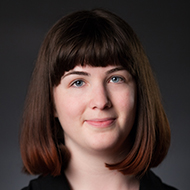 Growing up in Perth, Grace’s interest in theatre began at a young age. From early primary school she enjoyed creative subjects including music, art and drama. Accepted into high school on a music and academic scholarship, she was involved in many public choral and orchestral performances, where she developed an interest in what was happening behind the scenes, especially stage management.

Gaining experience with various Perth theatre companies before relocating to study at NIDA, Grace has enjoyed training in the many aspects of technical production.

Undertaking industry secondments in her final year with productions such as The Rabbits, Les Misérables and Matilda The Musical has confirmed her excitement and enthusiasm for her chosen field.

Upon graduation, Grace plans to work in stage management on opera and musical theatre productions. She is thankful for the support shown by family, friends and tutors during her time at NIDA.