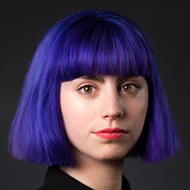 Laura Anna Lucas grew up in Greece, where she was extensively involved in theatre from a young age. In 2012, she moved to Sydney to study at NIDA in order to expand on her interest in design and refine her skills.

Prior to NIDA, Laura worked as an assistant set and costume designer in theatre and film. She worked on To Lose Lautrec and We Shall Leave Together for the National Theatre of Northern Greece/Sinequanon, The Dispute and A Midsummer Night’s Dream for Pausi, and Happy Days by Experimental Stage of Tehnis. Laura was a design assistant for the short films The Activists by Kostas Karydas and Thirteen Blue by Jacqueline Lentzou.

For her graduating pieces, Laura had the opportunity to collaborate with Kate Champion on the devised piece Not Who I Was and with Elsie Edgerton-Till on Boys.

In January 2016, Laura will be briefly returning to Greece to work with the artistic company En dynamei, designing costumes for their newly devised production Home?, To Mikro-Mikro Spiti in collaboration with the Onassis Cultural Centre. With both European and Australian citizenships Laura intends to work internationally in theatre and film.