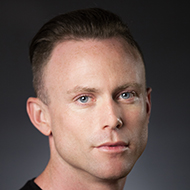 Prior to studying at NIDA, Jonathan completed a Bachelor of Arts (Honours) in English Literature and Theatre at UNSW. Following graduation he immersed himself in the theatre and art scenes throughout Europe. Returning to Australia, Jonathan pursued a successful career as retail planner in the fashion industry. During this time he studied garment construction at Ultimo TAFE, which led to him designing and creating costumes for a 40-person float in the Sydney Mardi Gras. In 2012 Jonathan designed and made costumes for The Criminals, directed by James Dalton.

Jonathan was production and costume designer for Halcyon Drive’s Whitewash music video, and designed set and costumes for Hunger, adapted by Samantha Young from Tom Wright’s Erysthicton and Mestra. In 2015 he designed the set for the premiere season of Vale, written by Nicki Bloom and directed by Jeff Janisheski, and costumes for Stranger I Am, a newly devised theatrical work by Craig Ilott. This year he also designed both set and costumes for The Wonderful World of Dissocia, directed by David Harrison for The Kings Collective.

Jonathan is currently realising his set and costume designs for Sports Play, directed by Clemence Williams as part of the NIDA Directors’ Productions 2015.