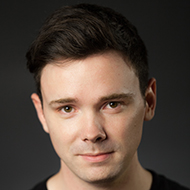 Prior to applying to NIDA, Jeremy completed a Bachelor of Architectural Studies at the University of South Australia, where he developed a passion for spatial, architectural and graphic design. From a very young age, Jeremy has been involved in youth and fringe theatre in Adelaide, including work presented in the Adelaide Fringe Festival from 2008–2011 and with Urban Myth Theatre of Youth.

In 2014, Jeremy designed the set and costumes for Sophocles’ Antigone and the music video for Zack Buchanan’s Home for triple j Unearthed and Rage. Earlier this year, Jeremy worked on creating the set and costumes for Shakespeare’s The Tempest, directed by Jim Sharman. He also devised the scenography and graphics for UNEND, presented as part of the 2015 Sydney Fringe Festival.

Jeremy is currently realising his designs for the set and costumes for Lewis Treston’s Reagan Kelly, directed by Benjamin Schostakowski. Jeremy is thrilled to be a recipient of a 2015 William Fletcher Foundation Tertiary Grant for emerging artists.