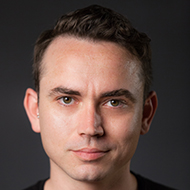 Before studying at NIDA, Anthony worked as a scenic painter for several Brisbane events companies, and then completed a Bachelor of Fine Arts (Technical Production) at Queensland University of Technology, graduating with Distinction. During this degree, he assisted designers Bill Haycock and Bruce McKinven. His training culminated in designing set and costumes for The Crucible. While in Brisbane he worked with Grin and Tonic, designing sets and animation for several productions, and costumes for burlesque performance.

Anthony is currently designing set and costumes for Kristine Landon-Smith’s new production of Capricornia. He is a recipient of the 2015 William Fletcher Foundation Tertiary Grant for emerging artists.