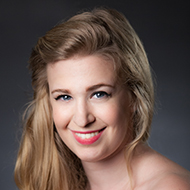 Edwina’s enthusiasm for costume making began at the age of seven when she and her grandmother would sew toys and dolls clothes together at their family farm in rural Victoria. Her grandmother’s passion passed on to her and Edwina made her foray into self- taught dressmaking throughout high school and gained experience by making costumes for school drama productions. Through her twin love of drawing and painting, Edwina began a Bachelor of Visual Arts at Monash University and trained in the areas of printmaking, glass, metalwork and painting. After spending time volunteering in the costume department of community run theatre companies in Melbourne, her love of costume making was rekindled and she commenced the Bachelor of Dramatic Art in Costume at NIDA.

Edwina’s visual arts background continues to be very influential on her costume making style, with a strong preference for heavily detailed and intricate work. Throughout her time at NIDA, Edwina has developed an intense passion for embroidery and textile embellishment with the aim of creating extravagant wearable art. Equipped with skills in men’s and women’s garment cutting and construction, tailoring, millinery, corsetry, leatherwork and shoemaking, Edwina looks forward to pursuing a career in costume making, embroidery and textile art.