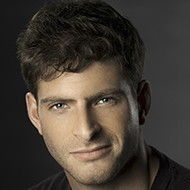 Born in London, Oliver moved to Sydney at the age of six. After attending Barker College, he graduated from the University of Sydney (USYD) with a Bachelor of Arts (Media/Communications), including a semester abroad at Royal Holloway, University of London.

While studying at USYD, Oliver was an active member of SUDS and Theatresports, with highlights including Closer, The Mercy Seat, Death and the Maiden and Don Juan in Soho.

During his final year of university, Oliver produced the inaugural season of the Sport for Jove Outdoor Shakespeare Festivals and then went on to become SFJ’s founding Business Manager, producing and performing for the award-winning company until leaving to attend NIDA.

Oliver is a regular face on Sydney’s improvised comedy scene, having founded impro company, The Post-Haste Players, for whom he continues to direct and play in the long-form improvised Shakespeare show, Bard to the Bone.

When not performing works of fiction, Oliver can be found on Sydney stages working as an MC/presenter, with clients including Telstra, Sony Playstation and Fox Sports.