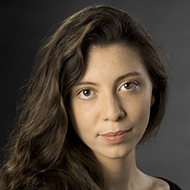 Miranda grew up in the Adelaide foothills. The daughter of two creatives, her childhood was spent surrounded by theatre and visual art, often travelling and occasionally performing with her parents’ school’s theatre company. During her teens Miranda’s passion for acting was nurtured by Urban Myth Theatre of Youth whilst her school life catered for her varied interests in a variety of sports, philosophy, music, visual art and language.

Following high school she spent a year living in Belgium, learning French and exploring parts of Europe. On her return Miranda began a Bachelor of Arts at Flinders University, studying French, English and Drama, which she discontinued to study acting at NIDA.