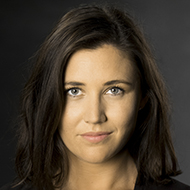 Lily Black is an Adelaide-born, Sydney-based actor. In Year 12, Lily won the State Theatre Prize for the top drama student in South Australia. She graduated from the University of Adelaide in 2012 with degrees in Law and Arts, including a semester in Uppsala University, Sweden and a legal clerkship in Shanghai. Throughout university, Lily acted, wrote and co-directed Adelaide Law School Revues.

She took a lead role in the 2011 Adelaide Fringe production of The House of Cards (dir. Lucy West- Sooby). Alongside study at NIDA, Lily played Ros in the sell-out Sydney Fringe season of The Midwife (dir. Samantha Young) in 2014. Following its success, she co-founded the Never Never Theatre Co. and is the publicist for its production of Unend (dir. Jessica Arthur) which premiered at the Sydney Fringe 2015. For this show the company won the Best Emerging Artist Award at the Sydney Fringe.

Lily is interested in all aspects of dramatic performance, particularly screen.