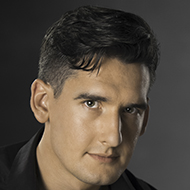 For Kyle, moving around WA as a kid meant a lot of time watching movies. When he was five years old, Kyle watched in awe as Robin Williams made people laugh, think, and feel in the movie Mrs Doubtfire. From that moment, Kyle knew he wanted to be an actor.

When his family moved to Adelaide and he finished high school, Kyle immediately enrolled at the Adelaide College of the Arts to begin his training. Since then, he’s starred in seven stage shows including The Crucible and Spring Awakening; 11 short films, several of which he wrote and produced; and in an independent feature film titled The Follower. Kyle then continued to hone his craft through further training at NIDA, commencing in 2013.

While at NIDA, Kyle was honoured with the Hazel Treweek Shakespeare Award for his excellence in classical text. This inspired him to begin developing his own work, producing and directing three one-act plays that he wrote for the NIDA Student Festival in 2015.

Now, after six years of training and 22 years of inspiration, Kyle is finally ready.