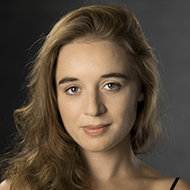 She has performed professionally in numerous shows both in London and at Edinburgh Festival. Josephine is also a published writer and prize-winning spoken word poet, and whilst at NIDA was given the huge honour of writing the show Not Who I Was, alongside Kate Champion of Force Majeure. She also enjoys composing music (saxophone and voice), improvisation and comedy. She is a dual citizen (Australia/UK).