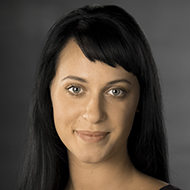 It is with great sadness that NIDA and the NIDA community recognises the tragic passing of our talented young NIDA graduate Jessica Falkholt in January 2018.

Swedish on her father’s side and Italian on her mother’s, Jessica was born and raised in Sydney. Jess has always had an avid interest in the creative process and after graduating high school she gained a BA in Media and Communications majoring in Theatre and Performance from the University of New South Wales. It was there her love for theatre thrived, first starring in a sell-out season of Cabaret at the historical Fig Tree Theatre, followed by numerous university theatrical society productions.

After graduating, Jess worked in the production department for Channel 7 and Carnival Films, whilst simultaneously building a resume for her work in front of the camera – featuring in many television commercials and appearing in guest roles for Australian television dramas. Having travelled extensively throughout Europe, Asia and the United States, Jess has a great affection for language and culture.

Endeavouring to hone her craft, Jess successfully auditioned for NIDA in 2012. Her studies have focused her desire to create all forms of work in a collaborative way, be that for film, television or for the stage.