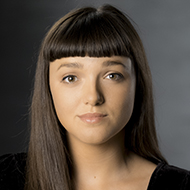 Jenna’s first acting role was as a yak on the Humphrey B Bear show. She was 10. She likes to think her range has increased since then.

Growing up on the outskirts of the Barossa in South Australia she always sought more from life than was simply offered. Her passion for acting came in part from her father, who loves film, and in part from her mother, who owns a local cinema. Childhood make-believe transformed into an ambition to become an actor. Aged nine, Jenna convinced her parents to enrol her in an acting course, which led to a three year stint at SA Casting.

In high school she focused on painting and drama, and in her senior year she was accepted into the Elite Ensemble at Actors Ink. After traveling overseas, Jenna’s creative passions turned to fashion. But after a year at fashion school she returned to her first love – acting. Jenna began at Adelaide College of the Arts in 2011, before being accepted into NIDA in 2013.

Jenna is passionate about telling stories. Particularly those inspired by real life; she always seeks to find magic in the mundane.