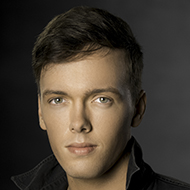 James grew up in Townsville, North Queensland. Throughout his secondary schooling he was a competitive rower and a keen student with a devotion to theatre and film. Much of his childhood was spent making short films and stories with his little brother, building sets out of Lego, matchbox cars and teddy bears. Following secondary school he started working with local theatre company, TheatreiNQ, garnering early experience with the works of Shakespeare. He then moved to Brisbane to begin study in English Literature at the University of Queensland. His studies accompanied work with various professional theatre companies in Brisbane including Zen Zen Zo physical theatre.

Over the years James travelled intermittently to parts of Southern Asia, New Zealand and Europe. He returned to Townsville occasionally to perform, before being accepted into NIDA’s Acting course for the 2013 intake. A year later James’ younger brother Joseph auditioned successfully for the same course, uniting them in Sydney in pursuit of their artistic careers. In his time outside of NIDA, James has begun writing and directing short plays for stage and screen inspired by his favourite novels, art and poetry.