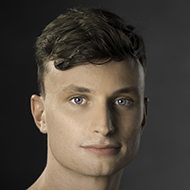 Jack was born in Melbourne and was raised on sport and 60s music with three sisters and two cats. He grew up playing cricket and soccer, learning the drums and teaching himself guitar.

Jack studied Performing Arts at Monash University and performed in a number of shows at Monash Uni student theatre including, The Tempest, The Laramie Project, Fear and Misery of the Third Reich and Spring Awakening, and directed a new work, Topsy Scurvy.

Jack has since performed in Writing Angus and The Cutting Boys at La Mama Theatre in Melbourne, A Midsummer Night’s Dream for Winterfall Theatre and No Names… No Pack Drill for Pine Heights Theatre. In 2008 Jack performed at the Arts Centre Melbourne, winning Best Actor (Runner-Up) for Mandragora in the Short+Sweet Festival.

While at NIDA, Jack has performed in Klutz by Ben Schostakowski for the NIDA 2013 Graduating Directors’ Program, and again in 2014 in Antigone, directed by Alastair Clark. He also performed in The Midwife at the Sydney Fringe 2014, as well as in several short film projects.

Outside of acting, Jack is interested in folk music, design, coffee and Frisbee, as well as writing and directing for theatre and film.