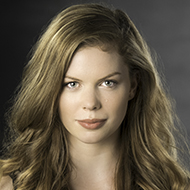 Born and raised in Hobart, Georgia stumbled upon a love for performing very early on through dance and singing, two skills she continued to develop throughout her childhood and teenage years. She dabbled in piano, guitar and ukulele, mostly to accompany the songs she’d write for her friends. With such a love for music and dance, the natural progression was music theatre, leading her to perform in various local productions such as High School Musical, The Wizard of Oz, Urinetown: The Musical, The Wedding Singer, A Funny Thing Happened on the Way to the Forum, and Les Miserables.

Georgia also began to play in front of the camera, landing her first of many commercials at age six, as well as appearing in a multitude of short films, and portraying Nancy Soloman in the 2012 feature film The First Fagin. In spite of this, Georgia had never taken any form of acting class prior to Year 11 drama. There she discovered a love for plays and acting beyond musicals, and was guided to realise that people actually form careers out of the hobbies she’d devoted herself to. She successfully auditioned for NIDA in 2012, a couple of weeks after finishing high school.