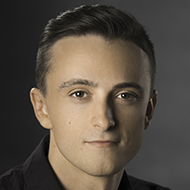 Elliott grew up in regional NSW, where he performed with the Tamworth Musical Society in productions including Les Miserables, West Side Story, Joseph and the Amazing Technicolour Dreamcoat, and Little Shop of Horrors. He also performed as a vocalist for six years with the Tamworth Regional Conservatorium of Music choir and the Tamworth Barber Shop, and received a scholarship to perform as a percussionist with the Tamworth Youth Orchestra. Elliott performed in music eisteddfods across the state’s north-west, Sydney’s Schools Spectacular and the Department of Education state drama camp.

Upon completion of his HSC, Elliott relocated to Sydney where he graduated with a Diploma of Theatre Performance from the Sydney Theatre School. He also studied improvised theatre for two years with Ferknerkle Productions, performing regularly at venues in Sydney and at the Sydney and Adelaide Fringe Festivals. He was an extra on films including Baz Luhrmann’s The Great Gatsby, Dean Murphy’s Charlie and Boots, and completed several courses in the NIDA Open program before being accepted into the Bachelor of Dramatic Art (Acting) in 2013.