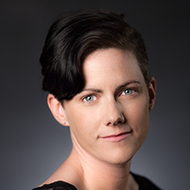 Prior to NIDA, Stephanie studied at the Australian National University completing a Bachelor of Arts majoring in Anthropology, History and Indigenous Australian Studies. These studies have proven to be an invaluable tool when researching for a new design.

Stephanie also studied design at the Design Centre Enmore TAFE which renewed her desire to work in film and theatre. She initially obtained work at the Sydney Conservatorium for Music designing set and costumes for Gluck’s opera Les Pèlerins de la Mecque and worked as assistant designer to Tobhiyah Stone Feller on Orpheus in the Underworld.

In 2014, Stephanie designed Jasia’s music video Inverbatim for the triple j Unearthed competition. She also worked as production and costume designer on the short film The Death of Abel.