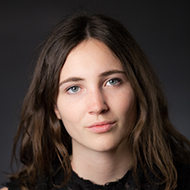 Having grown up in Byron Bay, Madeleine moved to Sydney to study Interior and Spatial Architecture at UTS where she developed her interests in architecture and design. However, it was her travels in India and Europe that inspired her to pursue her love of costume and set design in theatre and film.

Madeleine is currently realising her set designs for Craig Ilott’s new piece Stranger I Am and hopes to pursue future projects in event, film and theatre design.